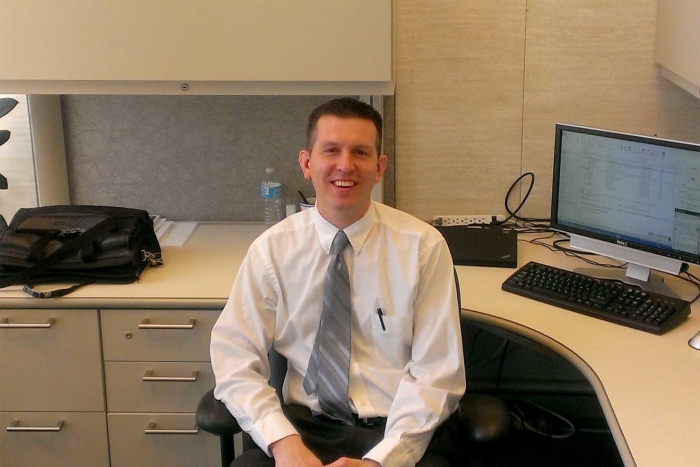 This was me on my last day at work when I voluntarily left my job of over seven years for a new job. The new job only lasted three months and I wasn’t so happy upon leaving it.

Summary:In my time of need, when I lost my job, the one institution that came to my aid was not church or government, it was the family–the program instituted by God that works phenomenally well and does so without taxes, without bureaucracy, and without compulsion. The best form of welfare comes from the family and it deserves our greatest love, devotion, protection, and strengthening.

I wrote a draft of this article several years ago but didn’t publish it for a variety of reasons, not the least of which was the freshness of some of the events. With it years in the past and with the upcoming presidential election year upon us in which there will be many debates between socialism and free market capitalism, I think it is now time to publish it.

Some years ago, I was unexpectedly fired from my job. I have heard a lot of stories over the years of people turning that kind of lemon into lemonade, and while it is my faith that all things have happened according to the goodness, mercy, and blessing of God, it was still a very difficult transition in many ways for me and my family. Thankfully, I was able to bounce back relatively quickly into the full-time work force, but during those difficult weeks of unemployment, I did learn an important lesson about to social safety nets, both public and private, that provide welfare assistance to families in need. I found there was a relationship between the proximity of the welfare to the family and the reliability and helpfulness of the welfare. Welfare from family sources was the fastest and best kind, even above and beyond the call of duty, whereas welfare from the government paid safety net was unreliable and in our case, a near complete failure.

Background of Losing My Job

In April of that year, I intentionally left my long time job at a non-profit organization. I enjoyed my work there for over seven years, but I felt that in the interest of furthering my professional career, I needed to move on. In May, I started a job with a small but growing local software company. The opportunity looked ideal, but it soon soured. My boss and I didn’t see eye to eye on many topics, and I found that some of the leadership of the company lacked integrity. I was trying my hardest to make it work, but one day, after three months on the job, I got pulled into a conference room and was let go.

I was shocked. I had never been fired in my life. I’m a hard worker, smart, well-educated, professional, non-combative, and a good team player. I never dreamed that someone would fire me, but all of a sudden I found myself in that unenviable situation. My thoughts immediately turned to concerns for the welfare of my family. What if I’m unemployed for an extended period? How will I pay my mortgage? How will I pay for food, clothes, and the other necessities of my family?

I went out to my car and I immediately called my wife. I was still in shock and near disbelief. She was angry, not at me but at the situation. To her credit, she was 100% supportive and encouraging and willing to make the sacrifices necessary to get our family through this tough situation.

#1 and Best Source of Welfare, Yourself

In our faith, the godly principles of self-reliance are taught and exemplified. The Church teaches it’s members to live prudently, save for a rainy day, be prepared for emergencies, and have a storage of food, supplies, and other needs. While not prepared as we could have or should have been, we did have a little money saved and we had a modest amount of food storage. We looked over our budget and tightened it as much as possible and given our savings, we thought we’d be able to survive for a few months on our own. There was no need to panic.

But while there was no immediate need to panic, we still knew that if the unemployment or underemployment lasted much longer than a couple of months, we knew we were in trouble and we were already worrying about what we would do then. We began to consider our options to get help through social welfare programs, government assistance, our church welfare, and so forth.

We knew we had family who would be willing to help us, and as soon as they found out about our situation they did just that. Without even being asked, my father, my father-in-law, and two of my brothers gave my family some money to help take care of our needs. It wasn’t a lot of money, but it helped and was enough to cover our mortgage for a month. I know if the unemployment was to continue, they would also continue to help. And as I would find out as time went on, this help from family was the only welfare that would come through, despite efforts to receive welfare assistance from Church and government sources.

Next Best Source of Welfare, The Church

I didn’t initially want to ask for assistance from my church, but a few weeks into my unemployment, after discussing the situation with trusted family and friends, they encouraged me to save what cash I had for other things and let the church give my family food assistance. It humbled me greatly to approach my local church leader and ask for that help for my family. I met with him and asked for the food assistance and said that he would be happy to help and that he would have the appropriate people in our church contact me to get the ball rolling.

A few weeks went by and we still hadn’t been contacted by the food assistance people at our church. I assume our church leader innocently dropped the ball and never made the appropriate call to get going on our welfare assistance. About a month after losing my job, I had landed a new job, paying much less than my old one, but still it was something. Therefore, we didn’t look further into the aid from our church. I’m sure we mistakenly fell through the cracks of the Church system and if we had reminded them, the arrangements for aid would have come through. Still, this is one of the reasons I put Church welfare as less reliable than family welfare sources. Though I still have complete confidence that Church welfare is better and more reliable than government welfare.

While we like being self-sufficient and prefer utilizing private sources of welfare, we thought since we have always been tax payers, we would should look into using the government sponsored welfare programs that our tax dollars have already been paying into. The first government program I looked into was unemployment insurance. I looked up the website for my state unemployment office and after some frustrating and fruitless time there, I found a phone number and called them. I was connected with a nice woman at their office, and after answering several questions, I was informed that I did not qualify for unemployment benefits.

I had often heard of COBRA health insurance, but I really didn’t know much about it. I did some research and found that COBRA stands for the Consolidated Omnibus Budget Reconciliation Act. It’s a law passed in 1985 that, among other things, gives health insurance companies the ability to continue to cover some employees after leaving employment. I don’t understand all the ins and out of the law, because I stopped investigating it when I found out that COBRA insurance is an optional program for employers and my last employer had opted out of participating in it.

The week after I lost my job, we were visiting family in another state. I was playing basketball with some family and friends and I collided with another player and split my head open just above my eye. It was bleeding profusely and the other players immediately took me to the emergency room. I could hardly believe my luck, or the lack thereof. I had been playing basketball two or three times a week for the prior 8 years without ever having a serious injury, and the week after I lose my health insurance, a basketball injury sends me to the emergency room.

I ended up getting six stitches and a really bad black eye. At the hospital, I told the attendants that I didn’t have health insurance and they gave me the number for their financial aid office. They didn’t collect anything while I was in the ER but a week or so later, I got a bill for over $1,000. I contacted the financial aid office, as I was instructed, but I was denied any benefits because I was not a resident of the state of the hospital that treated me.

Medicaid is a government health insurance program I knew about that is designed to help the poor in our country get healthcare. I had no idea if me and my family would qualify for Medicaid, so I began to look into it. The government websites were confusing and didn’t answer my basic question: would someone in my situation, who just lost his job and has a family to take care of, qualify for Medicaid. I next called the Medicaid office and after way too many menus and waiting on hold for 30 minutes, I finally was able to talk to a real person. Unfortunately, she wasn’t able to help me either except to point me to a 19-page application form. She said that the only way she could tell me if I qualified for Medicaid was if I filled out this mammoth, 19-page form!

At this point, having been unemployed for only a couple of weeks, and doubting that I would even qualify, I opted not to spend an entire day filling out the Medicaid form. I thought my days would be better spend job hunting and putting in employment applications. Had my unemployment drawn on longer, I probably would have acquiesced and completed the form, luckily, it never came to that. But I was disappointed that simply eligibility questions could not be answered without filling out an overly lengthy and complicated application form.

We, collectively, spend millions of dollars in our churches on welfare programs to help the poor and needy. In our government, we collect (from tax payers) and spend billions of dollars on social welfare programs of every variety. Yet in my time of need, not a single one of those church or government programs was able to help me. The one program that was able to help me was the program instituted by God–the family. The one institution that did come to our aid and helped my family when we were unemployed was family.

So in a time of debate about expanding government programs, like Medicare for All and so forth, I share my experience as a cautionary tale. I think it is foolish to continue to throw money into giant, bloated, bureaucratic government welfare programs that clearly do not work. These programs do not need to grow or be expanded, they need to be streamlined and made to be more efficient and effective. And instead of investing more in programs that do not work, what we need to do is strengthen the family, the institution that works phenomenally well and does so without taxes, without bureaucracy, and without compulsion. The family is the best social safety net, and it deserves our greatest love, devotion, protection, and strengthening.