I read an article recently about some teenagers that got in a car accident. The only person to survive was the one who was wearing his seat belt. It takes a liberal to read a story like that and conclude that seat belts are ineffective in saving lives. You see, the people not wearing seat belts died, so obviously the multi-million dollar ad campaigns to get people to wear their seat belts are not working and should be abandoned.

Crazy as it sounds, this is the logic of the liberal politicians use when they say that abstinence does not work. Democrat congressman John Dingell recently called abstinence education a “colossal failure” and Democrat representative Diana DeGette said abstinence education does not work and labeled spending money on it as “squandering.” (see this FoxNews article) Like the seat belt example above, they say it doesn’t work because a great many teens do not heed the warning to abstain from sex before marriage. While we wouldn’t stop advising our kids to use of seat belts because some do not heed the advice, we definitely should not abandon abstinence education programs. 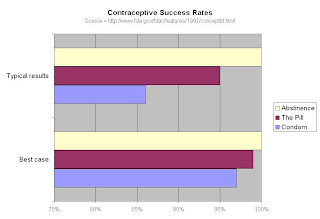 If anything, we should push abstinence even more because, the fact of the matter is that abstinence is the only method guaranteed to work 100% of the time. Seat belts don’t even have that guarantee. When seat belts fail (or people fail to use seat belts), Democrats say we have to increase funding and expand the program (i.e. the $30 million Click It or Ticket program), but when abstinence educated has lackluster results, those same democrats want to get rid of it entirely.

Abstinence works every time it is tried, and we as parents, and society at large must do more to encourage kids to wait until they are married to engage in sexual activity. But unfortunately (Democrat run) government is failing us and Hollywood, TV and movies continue to glorify sex outside of wedlock. I would expect these societal trends to continue, which leaves abstinence education up to the parents. And this parent will continue to teach abstinence before marriage to my own children and all within the sound of my voice, because while you may be able to prevent 90% of the physical consequences, there is no condom for the emotional, mental or spiritual consequences of premarital sex.