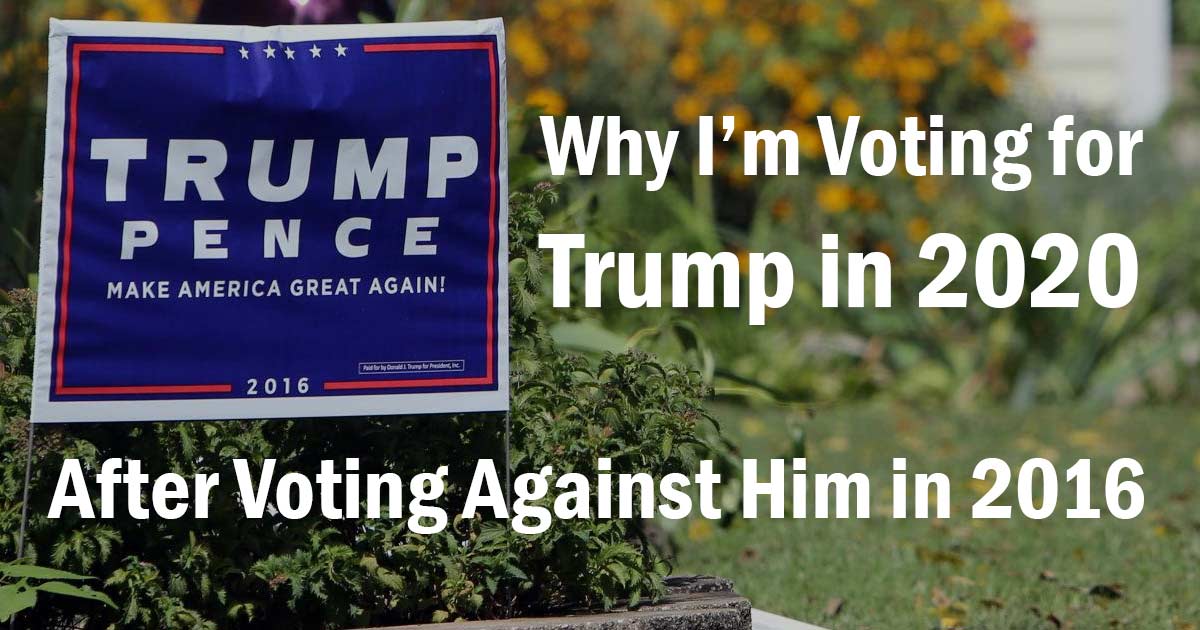 In 2016, I was not a Trump fan, but in the four years since then, I have slowly turned from an opponent to a solid supporter who will pull the lever and vote for Trump for President in 2020. The following is my explanation of the evolution of how and why that transition happened as well as other factors I considered in my 2020 choice for US President.

This article is quite long article, and even then it is by no means comprehensive, so it is divided into sections that you can easily jump to with the following links:

The decision to vote for Trump was not something I took lightly or came to quickly. I have thought and prayed long and hard about it, and done much research. I read news articles from sources all across the political spectrum–left, right, and center. I have tried to document as many of those sources as possible in the hyperlinked text throughout the article. Please check out those references for more details on a given subject.

I should set the stage by briefly going over why I voted against Donald Trump in the first place back in 2016. I am a registered Republican, so you might think I would vote for the party’s nominee. But I vote for the person, not the party (a principled stance more people ought to take), and I had major concerns about Donald J. Trump. I could not bring myself to vote for Trump for a myriad of reasons, and voting for the Democrat party candidate, Hillary Clinton, was not an option either, since she seemed corrupt and her policies were not my idea of good government. I ended up voting for a third party candidate in 2016, and honestly, after Trump was elected, I felt homeless, politically speaking. I thought the Republican party had elected someone who would not only ruin the party, but could ruin the country as well.

Before the 2016 election I had a conversation with a friend in which we both agreed that we should vote for people who are morally good. Of course, unless Jesus Christ is running for office, no one is going to be perfect, therefore everyone you vote for will have some good and some bad elements. At that time, I came to the conclusion that Trump did not meet my minimum threshold for goodness. My friend, and many other Republicans, thought he did meet the threshold. So we agreed on principles but differentiated on where to place Trump in respect to that threshold.

Four years later, however, while I still think Trump is far from perfect, he does now meet my threshold of good enough to vote for. Let me explain why.

Overall, I have been pleased with Trump’s handling of the Presidency. Of course, there are things I wish he would do differently (more on that below), but overall, many of my fears about Trump turned out to be unfounded and he has implemented many good policies that I believe are benefiting the country.

Things I Don’t like about Trump, Some I’ve Learned to Deal With, Others I Wish He’d Change

In balance, I think Trump has been a good president, but I’m not blind to the inappropriate, wrong-headed, and sometimes idiotic things he says and does. For example…

These are all weaknesses of Trump, and with time we could list even more. I wish he didn’t have these weaknesses, but as Abraham Lincoln and Peter Drucker have said, in picking a leader, you should focus on their strengths, not their weaknesses, and when you look at that holistic picture, I think Trump brings many more positive strengths to the table, and certainly more than Joe Biden.

Why I Cannot Vote for Joe Biden

There is much more that could be discussed regarding why I cannot to vote for Joe Biden. Suffice it to say, I don’t think he would be a good president on any level–honesty, wisdom, or goodness.

For those who are wondering if I considered any third party candidates, the answer is yes. I have often voted for people outside the two main, Republican and Democrat, political parties. In fact, there are many problems with the two-party-only system–I think it contributes to the corruption and the swamp environment that exists in Washington. So I considered third parties like the Constitution party, but they are on the ballot in only about half of the states, and therefore have no chance to win. I also gave Jo Jorgensen, the Libertarian candidate for president, a good look. She has a lot of pros, but some cons as well, and ultimately, I didn’t see the net benefits as so great to push me over to her side. But here’s a summary of the pros and cons about Jo Jorgensen, the Libertarian candidate for president.

Jo Jorgensen says a lot that I agree with. Here are some examples taken from her website, jo20.com:

While all of those are great statements, I also have my share of concerns about Jo Jorgensen, like the following:

Having surveyed the field of third party candidates, none stand out to me, and given the dire circumstances of our country today, I think it is more important to rally around a pretty good candidate, like Donald Trump, who has the best chance to defeat the socialists and other extremists in our country. The time may come when we need to vote for 3rd party candidate but it is not this year. Donald Trump, despite his shortcomings, has been an effective chief executive for the nation, and given the track record he has, I think he will continue to be a good president and we should unite behind him. Unity to defeat the radicals in our political system is vitally important in this election cycle because, if we don’t, I fear we won’t have a country left to save.

All things considered, I think Donald Trump is the best choice for president in 2020. He is not the perfect candidate, that’s for sure, but his record shows that he will enact mostly good policies. And perhaps more importantly, he has shown himself to be one of the few politicians willing and able to stand up against the extreme elements of our society that would surely bring anarchy, violence, injustice, and ruin to our country. Few decisions in life are clear cut–absolutely right versus absolutely wrong–and the decision of who to vote for as president is no different, therefore, I don’t fault friends and family who think differently and vote differently. But if you are on the fence about Donald Trump, perhaps this article will give you courage to come on over to the Trump side.

Why I Turned Off Google as My Search Engine: to Stop their Indoctrination