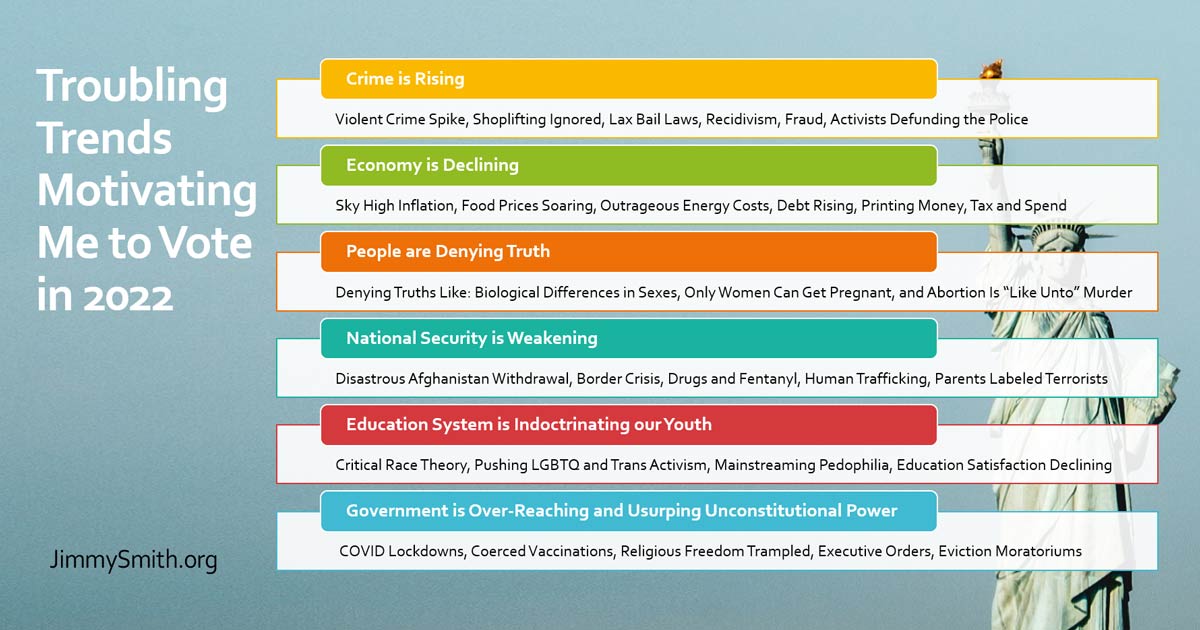 Election day is around the corner and there are many troubling trends in our society that are motivating me to go vote. I certainly don’t want to look to government or politicians to solve all of the society’s problem because that can cause more harm than good. But I do want elect representatives who share the same concerns I do and who will take appropriate action to fix them.

When it comes to political parties and candidates, I tend to have strong opinions, but I don’t want to talk about that today. I hate the team sports perspective on politics and therefore, rather than advocating for or against any party or politician, I want to focus on higher-level issues. I believe a focus on good principles is what will lead to lasting, positive change in our country–I’ll leave to you their application to political parties, policies, and candidates.

I have listed below some of most salient and concerning trends, and I have categorized them into the following groups (in no particular order of importance) with the sections to follow having more details as well as links to news articles and examples:

If you care about setting our country’s course for the better in these areas, as I do, please educate yourself on these issues and the candidates’ stance and ability to address them, and then get out  there and vote.

Violent crime on the rise, often in places where, no coincidently, leaders have been defunding the police. Shoplifters are ignored in some cities and are not being prosecuted. One prominent district attorney was recalled for going soft on crime, letting criminals out of jail and instead prosecuting police officers. Violent offenders are being bailed out of jail by political activists, and other criminals are being released, with or without bail, only to commit more violent crime. And with the bigger government and increased spending often comes more criminals gaming the system. For example, a recent study found $163 Billion in COVID relief fraud. Those are public funds, our tax dollars, being stolen from our back pockets and little oversight or accountability from public officials.

Inflation is at record highs as gas and food prices increase at their highest paces in decades. The first six months of 2022 saw a shrinking U.S. economy, thus putting us into a recession. Misguided policies of taxing, spending, and even printing money is making the inflation worse and robbing Americans of their hard earned salaries and increasing our national debt. Businesses are struggling to find workers, largely due to government policies that incentive not working. Supply chain issues are cause shortages of just about everything we buy, from coffee to meat to medication to cars to baby formula. Energy prices are through the roof and energy shortages of energy everywhere. Many states are asking residents to conserve power, change their thermostat, and avoid charging electric vehicles due to blackout risk.

Many people are denying the basic, biological differences between the sexes. People are being labeled as ‘transphobic’ for telling obvious truths like only women have babies and men do not have menstrual periods. One major newspaper has stopped using the term woman, favoring instead teams like “menstruators” or “pregnant people.” Another truth so often denied by some groups in our society is that is that unborn babies are people and that abortion is “like unto” murder. Some groups have even been advocating the killing of babies after birth, referring to this infanticide as post-birth abortion. Thankfully, there have been some victories in protecting the lives of the unborn, such as the recent Supreme Court ruling that turned abortion regulations back over to the states, but that is only a first step and much more still needs to be done.

The hasty Afghanistan withdrawal resulted in 13 dead soldiers, thousands of allies trapped behind enemy lines, and billions of dollars worth of equipment given to a terrorist regime. Our southern border is less secure than it has been in years with drugs pouring over in record numbers fueling the fentanyl crisis, increasing human trafficking, and illegal border crossings at an unprecedented high. And while the federal government has ignored their duty to keep our country safe and secure, they have instead weaponized the government against the citizens with things like out-of-control civil asset forfeiture and doubling the number of IRS agents to harass the public, and parents attending school board meeting being labeled as terrorists. Not even the former president of the United States is safe in his home from illegal search and seizure in today’s political environment.

Education System is Indoctrinating our Youth

The federal government recently proposed educational guidelines that would promote Critical Race Theory (CRT) and other teachings judge people other based on skin color. (My personal, yet gospel based, thoughts on CRT can be found here.) Though many states and teachers unions are promoting CRT in school, parents and many other states are successfully blocking CRT. Many school districts are also pushing LGBTQ activism and transgender activism on our kids, like this Minnesota Principal who promoted a book on ‘trans’ toddlers to kindergarteners. Thankfully, many parents and officials are pushing back against this indoctrination as has notably been the case in Florida and elsewhere. Colleges and universities have long been known for teaching as much political indoctrination as real education, but they are taking it to new heights like this supposed mainstream university that is honoring horrific pedophiles. It’s no surprise that satisfaction with public education is at a 20-year low as noted in this story that only 42% of Americans said they are satisfied with K-12 education.

From COVID lockdowns which did more harm than good by devastating young people’s mental health to Federal government attempts to force all workers to get vaccinated, governments over-reach has escalated to new heights in recent years. Recently, the Facebook CEO admitted the federal government pressured them to suppress speech, and arranged weekly calls to discuss what to censor on the platform. The religious freedoms trampled on during the government imposed lockdowns is another example of unconstitutional over-reach. Some states allowed lawyers and liquor stores to remain open but did not allow churches to meet or congregate. The recent executive order on student loans was not only an unconstitutional way to spend billions of dollars without congressional oversight, it will pour fuel on an already out-of-control inflation fire and cause increased labor shortages, shifts money from the poor working class to the most rich and educated, plus it pour billions into a corrupts university system that has seen administrative jobs double of over the past years, while actual teacher have not. Here’s an example of a prominent politician’s wife getting a $300K, cushy university job in exchange for political favors. Eviction moratoriums at the federal, state, and city level are another example of governments suppressing freedom in unconstitutional power grabs.