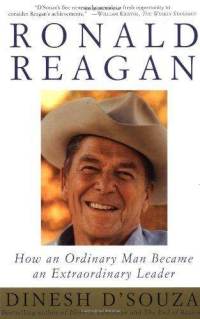 Ronald Reagan: How an Ordinary Man Became an Extraordinary Leader is a great book by Dinesh D’Souza, a former policy analyst for the Reagan administration. I thoroughly enjoyed the book, and particularly, the leadership principles that can be gleaned from Reagan’s words and actions.

After being shot in a failed assassination attempt, Reagan was visited by Mother Teresa who said, “Because of your suffering and pain you will now understand the suffering and pain of the world. This has happened to you at this time because your country and the world need you.” (p. 207) Reagan was a rare and effective leader, the type of which the world needed at that time. While there may never be another Reagan, the world could certainly use more leaders like him, now and in the future. Here are some of my favorite quotes from the book.

Family and Religious Values of Reagan

Reagan on Freedom and Socialism

Standing up to Communism

Hatred of Reagan from Media and Intelligentsia