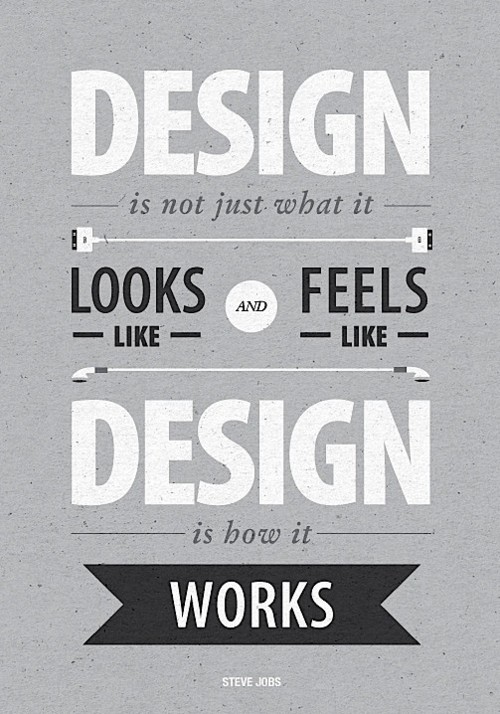 As I recently read his biography Steve Jobs by Walter Isaacson. I’m not a big Apple fan (as some of you know) but Jobs was a very successful businessman and the book came highly recommended the book, so I thought I would give it a try.

I found almost nothing praiseworthy in the first half of his life. He all but rejected the Christian religion he was raised on. He did drugs, and he slept around with many girl friends.  He was a jerk, selfish, difficult to work with, arrogant, subject to extreme mood swings, condescending, stubborn, rude, immature, a control freak, obsessive compulsive, and overly critical.

Yet Steve Jobs was one of the most successful business leaders the world has ever seen. He had remarkable aptitude (and plenty of luck) in the business world which paid great dividends when he did eventually mature somewhat. He built Apple into the world’s most successful company, and he ended up making a very positive impact on the field of design, technology, and many other industries.

Here are some of my favorite quotes from or about Steve Jobs and Apple: 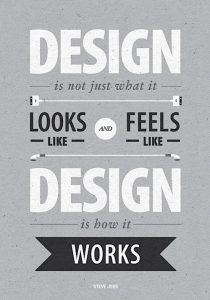 “In most people’s vocabularies, design means veneer. It’s interior decorating. It’s the fabric of the curtains and the sofa. But to me, nothing could be further from the meaning of design. Design is the fundamental soul of a man-made creation that ends up expressing itself in successive outer layers of the product or service. The iMac is not just the color or translucence or the shape of the shell. The essence of the iMac is to be the finest possible consumer computer in which each element plays together.” -Steve Jobs in Fortune magazine, Apple’s One-Dollar-a-Year Man

”Most people make the mistake of thinking design is what it looks like,” says Steve Jobs, Apple’s C.E.O. ”People think it’s this veneer — that the designers are handed this box and told, ‘Make it look good!’ That’s not what we think design is. It’s not just what it looks like and feels like. Design is how it works.” The Guts of a New Machine, Rob Walker, November 30, 2003

“Simplicity is the ultimate sophistication.” – Leonardo da Vinci and the headline of Apple’s first marketing brochure in 1977 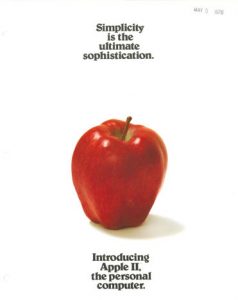 “The way we’re running the company, the product design, the advertising, it all comes down to this: Let’s make it simple. Really simple.”  -Steve Jobs, How Steve Jobs’ Love of Simplicity Fueled A Design Revolution, Smithsonian Magazine

“You have to deeply understand the essence of a product in order to be able to get rid of the parts that are not essential…We wanted to get rid of anything other than what was absolutely essential,” he said. “To do so required total collaboration between the designers, the product developers, the engineers and the manufacturing team. We kept going back to the beginning, again and again. Do we need that part? Can we get it to perform the function of the other four parts?” -Jony Ive describing one of Apple’s Power Macs, Smithsonian Magazine.

“I remember very clearly Steve announcing that our goal is not just to make money but to make great products.” -Jony Ive, Smithsonian Magazine

“My passion has been to build an enduring company where people were motivated to make great products. Everything else was secondary. Sure, it was great to make a profit, because that was what allowed you to make great products. But the products, not the profits, were the motivation. Sculley flipped these priorities to where the goal was to make money. It’s a subtle difference, but it ends up meaning everything: the people you hire, who gets promoted, what you discuss in meetings.” – Steve Jobs in Walter Isaacson’s book 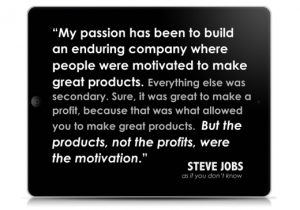 “Some people say, “Give the customers what they want.” But that’s not my approach. Our job is to figure out what they’re going to want before they do. I think Henry Ford once said, “If I’d asked customers what they wanted, they would have told me, ‘A faster horse!'” People don’t know what they want until you show it to them. That’s why I never rely on market research. Our task is to read things that are not yet on the page.” – Steve Jobs in Walter Isaacson’s book

Soon after returning to Apple in 1997, Jobs was at a big product strategy session. The previous CEO had been urging Apple to develop more and more products. “‘Stop!’ he [Jobs] shouted. ‘This is crazy.’ He grabbed a magic marker, padded to a whiteboard, and drew a horizontal and vertical line to make a four-squared chart. ‘Here’s what we need,’ he continued. Atop the two columns he wrote “Consumer” and “Pro”; he labeled the two rows “Desktop” and “Portable.” Their job, he said, was to make four great products, one for each quadrant. ‘The room was in dumb silence,’ Schiller recalled.” – Walter Isaacson

“The product review revealed how unfocused Apple had become. The company was churning out multiple versions of each product because of bureaucratic momentum and to satisfy the whims of retailers. “It was insanity,” Schiller recalled. “Tons of products, most of them crap, done by deluded teams.” Apple had a dozen versions of the Macintosh, each with a different confusing number, ranging from 1400 to 9600. “I had people explaining this to me for three weeks,” Jobs said. “I couldn’t figure it out.” He finally began asking simple questions, like, “Which ones do I tell my friends to buy?” When he couldn’t get simple answers, he began slashing away at models and products. Soon he had cut 70% of them.” – Walter Isaacson

“[Jobs] never worshipped at the altar of consensus.” In 1997, when Jobs returned to Apple as CEO, he “was not tentative in his actions. He was in charge, and he did not rule by consensus.” – Walter Isaacson

“Despite his autocratic nature… Jobs worked hard to foster a culture of collaboration at Apple…He had the Pixar building designed to promote encounters and unplanned collaborations. “If a building doesn’t encourage that, you’ll lose a lot of innovation and the magic that’s sparked by serendipity,” he said. “So we designed the building to make people get out of their offices and mingle in the central atrium with people they might not otherwise see.” The front doors and main stairs and corridors all led to the atrium, the cafe and the mailboxes were there, the conference rooms had windows that looked out onto it, and the six-hundred-seat theater and two smaller screening rooms all spilled into it. “Steve’s theory worked from day one,” Lasseter recalled. “I kept running into people I hadn’t seen for months. I’ve never seen a building that promoted collaboration and creativity as well as this one.” – Walter Isaacson

“I realized that A players like to work with A players, they just didn’t like working with C players. At Pixar, it was a whole company of A players. When I got back to Apple, that’s what I decided to try to do. You need to have a collaborative hiring process. When we hire someone, even if they’re going to be in marketing, I will have them talk to the design folks and the engineers.” – Steve Jobs in Walter Isaacson’s book