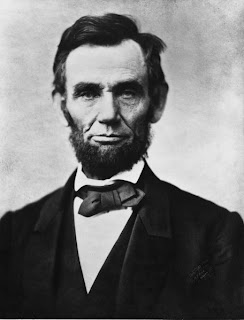 In honor of our sixteenth president’s birthday, February 12, 1809, I thought I would share some inspirational quotes from this great man. All quotes are taken from David Herbert Donald’s book “Lincoln”, which I recently read.

Lincoln on the Bible
Lincoln was not a member of any specific Christian church, though he often found comfort and reassurance in the Bible. To a friend who was skeptical of the Bible’s veracity, Lincoln said, “take all of this book upon reason that you can, and the balance on faith, and you will live and die a happier and better man.”

To a group of African-Americans who presented him with a magnificently bound Bible in appreciation for his work for the Negro, Lincoln said, “this Great Book…is the best gift God has given to man.”

Trusting the Almighty
Often Lincoln reverted to the idea that behind the struggles and loses of the Civil War, a Divine purpose was at work. “The purposes of the Almighty are perfect, and must prevail, though we erring mortals may fail to accurately perceive them in advance. We hoped for a happy termination of this terrible war long before this; but God knows best, and has ruled otherwise…we must work earnestly in the best light He gives us, trusting that so working still conduces to the great ends He ordains.”

Better to let them think you are foolish
Than to open your mouth and prove it
Never happy at extemporaneous speaking, the President once apologized to a group of people that wanted him to make a speech on the spot. “In my position,” he said, “it is somewhat important that I should not say any foolish things.” A voice from the crowed then said, “If you can help it.” To which Lincoln replied, “It very often happens that the only way to help it is to say nothing at all.”

Adopting True Views
In response to critics accusing him of a political flip-flop, Lincoln said that he would always “adopt new views so fast as they shall appear to be true views.”

The Incredibly Short but Amazingly Powerful Gettysburg Address
“Four score and seven years ago our fathers brought forth on this continent a new nation, conceived in Liberty, and dedicated to the proposition that all men are created equal.

“Now we are engaged in a great civil war, testing whether that nation, or any nation, so conceived and so dedicated, can long endure. We are met on a great battle-field of that war. We have come to dedicate a portion of that field, as a final resting place for those who here gave their lives that that nation might live. It is altogether fitting and proper that we should do this.

“But, in a larger sense, we can not dedicate—we can not consecrate—we can not hallow—this ground. The brave men, living and dead, who struggled here, have consecrated it, far above our poor power to add or detract. The world will little note, nor long remember what we say here, but it can never forget what they did here. It is for us the living, rather, to be dedicated here to the unfinished work which they who fought here have thus far so nobly advanced. It is rather for us to be here dedicated to the great task remaining before us — that from these honored dead we take increased devotion to that cause for which they gave the last full measure of devotion — that we here highly resolve that these dead shall not have died in vain — that this nation, under God, shall have a new birth of freedom — and that government of the people, by the people, for the people, shall not perish from the earth.”

Why I Oppose Gambling/Lotteries? Giving the Iraq War Its Proper Perspective
Scroll to top