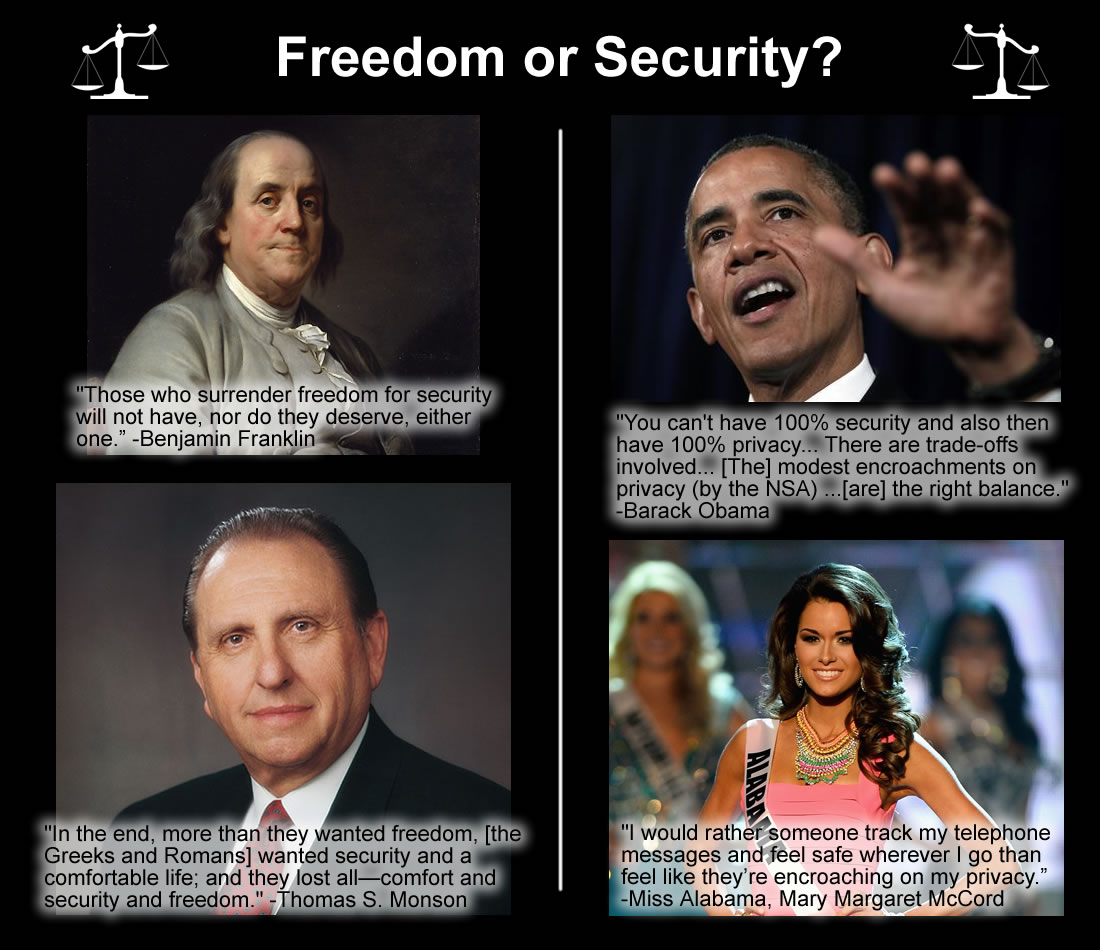 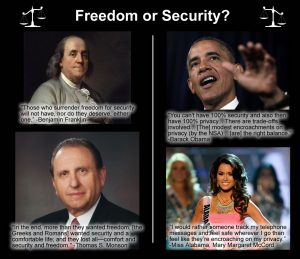 The debate concerning the balance between freedom and security has been a hot topic in US politics this summer of 2013. The topic reached a boiling point when Edward Snowden leaked information about how the US National Security Agency (NSA) is spying on the US’s own citizens.  Two NSA surveillance programs were revealed, one that gathers hundreds of millions of U.S. phone records each day, and one that taps directly into the servers of nine major Internet companies to gather usage information. Here is a sampling of the news articles:

Miss Alabama: I would rather feel safe

The debate between freedom and security even spilled over into popular culture when a question on the subject came up in the Miss USA pageant. Miss Alabama, Mary Margaret McCord, was asked this question: “Government tracking of phone records has been in the news lately. Is this an invasion of privacy or necessary to keep our country safe? Why or why not?”

Miss Alabama’s response was: “I think the society that we live in today, it’s sad that if we go to the movies or to the airport or even to the mall that we have to worry about our safety. So that I would rather someone track my telephone messages and feel safe wherever I go than feel like they’re, um, encroaching on my privacy.” (see the June 17, 2013 Washington Post article, Miss USA interview questions and answers)

I couldn’t believe my ears when I heard this quote. The fact that this attitude is so excepted and prevalent in our society makes me fear for our freedom. Our freedoms are already slipping away and if the American people so easily give up their freedom, before long they will have no freedoms at all. Why? Because, as has often been said, a government big enough to give you everything you want, including security, is a government big enough to take away everything you have.

Benjamin Franklin: Those who surrender freedom for security will have neither

My sentiment on the matter is shared by one of our great founding fathers, Benjamin Franklin. He said, “Those who surrender freedom for security will not have, nor do they deserve, either one.” The Wikiquotes entry on Benjamin Franklin says that statement is a common paraphrased derivative of the actual Benjamin Franklin quote, “They who can give up essential liberty to obtain a little temporary safety, deserve neither liberty nor safety”, but the point remains.

Barack Obama: The NSA’s encroachments on privacy are the right balance

Of course our 44th President of the United States, Barack Hussein Obama II, seems to side with Miss Alabama. In the days after the NSA surveillance programs were came to light, he is quoted as saying, “You can’t have 100 percent security and also then have 100 percent privacy and zero inconvenience. We’re going to have to make some choices as a society. … There are trade-offs involved. …[The] modest encroachments on privacy (by the NSA) …[are] the right balance.” (See the June 7th story from Reuters, Obama defends surveillance effort as ‘trade-off’ for security)

Thomas S. Monson: They wanted security more than freedom and lost it all

With these political and popular culture quotes on my mind, I was quite surprised to recently hear the president of the Church of Jesus Christ of Latter-day Saints weigh in on the issue. Thomas S. Monson, in his July message to all the people of the Mormon faith, said: “We forget how the Greeks and Romans prevailed magnificently in a barbaric world and how that triumph ended—how a slackness and softness finally overcame them to their ruin. In the end, more than they wanted freedom, they wanted security and a comfortable life; and they lost all—comfort and security and freedom.” (See his July 2013 Liahona magazine article, The World Needs Pioneers Today)

Where do you stand? Security or Freedom?