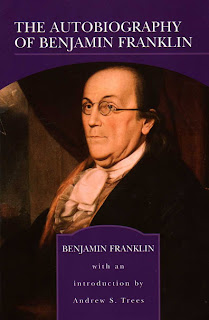 I just completed reading the Autobiography of Benjamin Franklin and I very much enjoyed it. What surprised me was how funny the book was. Not laugh out loud funny, but funny in how well I related to a man 270 years older than myself. Here are some of my favorite quotes:

The Vegetable Diet
“I had stuck to my resolution to eat nothing that had had life. I considered the taking of every fish as a kind of unprovoked murder, since none of them had done or could do us any injury that might justify the massacre. All this seemed reasonable. But I had been formerly a great lover of fish, and when it came out of the frying pan it smelled admirably well. I balanced some time between principle and inclination, till, thought I, ‘If you eat one another I don’t see why we may not eat you’; so I dined upon cod very heartily, returning only now and then occasionally to a vegetable diet.”

Good Presbyterians versus Good Citizens
“Though I seldom attended any public worship, I had still an opinion of its propriety and of its utility when rightly conducted. (The local Presbyterian minister) used to visit me and admonish me to attend his administrations, and I was now and then prevailed upon to do so, once for five Sundays successively. Had he been in my opinion a good preacher, perhaps I might have continued, but his discourses were…very dry, uninteresting, and unedifying; since not a single moral principle was inculcated or enforced, their aim seeming to be rather to make us Presbyterians than good citizens.”

Good Sermons Composed By Others
Referring to a preacher who was run out of town for plagiarizing sermons, Franklin said, “I rather approved his giving us good sermons composed by others than bad ones of his own manufacture.”

“Industry and Frugality as the Means of Procuring Wealth”
“We have an English proverb that says, ‘He that would thrive must ask his wife.’ It was lucky for me that I have one as much disposed to industry and frugality as myself.”

“I have always thought that one man of tolerable abilities may work great changes and accomplish great affairs among mankind if he first forms a good plan, and cutting off all amusements or other employments that would divert his attention, makes the execution of that same plan his sole study and business.”

“The inhabitants of London choose voluntarily to live much by candlelight and sleep by sunshine, and yet often complain, a little absurdly, of the duty on candles and the high price of tallow (an ingredient of candles).”

Arriving at Moral Perfection
“I conceived the bold and arduous project of arriving at moral perfection. I wished to live without committing any fault at any time. As I knew, or thought I knew, what was right and wrong, I did not see why I night not always do the one and avoid the other. But I soon found I had undertaken a task of more difficulty than I had imagined. While my attention was taken up and care employed in guarding against one fault, I was often surprised by another; habit took the advantage of inattention; inclination was sometimes too strong for reason. I concluded at length that the mere speculative conviction that it was our interest to be completely virtuous was not sufficient to prevent slipping, and that the contrary habits must be broken and good ones acquired and established before we can have any dependence on a steady, uniform rectitude of conduct. For this purpose I therefore tried the following method…”

Pride
“There is, perhaps, no one of our natural passions so hard to subdue as pride…For even if I could conceive that I had completely overcome it, I should probably be pride of my humility.”

“Human Felicity is produced not so much my great pieces of good fortune that seldom happen as by little advantages that occur every day.”

“When men are employed they are best contented; for on the days they worked they were good-natured and cheerful…but on our idles days they were mutinous and quarrelsome.”

Not Seeking Out Nor Refusing An Office
When some told Franklin there was no way he would be re-elected and that he should go ahead and resign, he said, “I had read or heard of some public man who made it a rule never to ask for an office and never to refuse one when offered to him. ‘I approve,’ said I, ‘of this rule, and shall practice it with a small addition: I shall never ask, never refuse, nor ever RESIGN an office.'”

Other Grain = Gun Powder
Referring to the Quakers in Pennsylvania, who were ‘officially/doctrinally’ opposed to supporting war, Franklin noted, “They would not grant money to buy powder, because that was an ingredient of war, but they voted an aid to New England of three thousand pounds…for the purchase of bread, flour, wheat and other grain. The governor was then quoted saying, ‘I understand very well their meaning; other grain is gun-powder;’ which he accordingly bought, and they (the Quakers) never objected.”

Serving Others Freely and Generously
After declining to accept a 10-year patent for the sole vending a stove he designed for the better warming of homes, Franklin said, “as we enjoy great advantages from the inventions of others, we should be glad of an opportunity to serve others by any invention of ours, and this we should do freely and generously.”