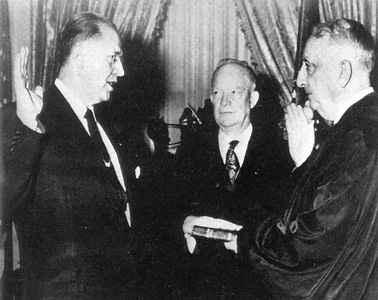 In the LDS Church General Conference of April 1968, Ezra Taft Benson, a member of the Church’s Quorum of the Twelve Apostles, and former Secretary of Agriculture in the Eisenhower administration, gave a talk called Americans Are Destroying America.  The full text of the talk can be found in a couple of places online, http://rogmo.com/98.html, and http://www.ldsinfobase.net/liberty/ETB_68apr.html.

My friend Greg McMurdie shared the article with me recently, and I found it to be a fascinating read.  I guess what amazes me most is that if the situation was bad when President Benson gave this speech 40 years ago, how bad must the situation be now!

The first source mentioned above even says that the talk was entered in the Congressional Record by Senator John McClellan of Arkansas with the following  introduction on the Senate floor:

“Mr. Benson’s speech . . . should be read by every American citizen, and I hope the central truth it conveys that Americans, by their lack of self-discipline, by their apathy and indifference, and by their lack of will and resolve, can succeed in destroying America.”
(See Congressional Record, April 22, 1968)

President Benson’s main point is that no outside force can or will destroy America.  The United States of America was conceived and built by men that God raised up for this very purpose.  And it is only by Americans turning their back on God and the founding principles of the US Constitution that America can be destroyed.  Unfortunately that is happening; the moral fabric of America is eroding at an alarming rate, and the Constitution is being trampled by scheming politicians.  All the while, average everyday Americans are frequently blind to these changes, being lulled to sleep by a culture of entertainment and entitlement.

All Is Not Lost: A Plan of Action

Though America is in dire straights, all is not lost.  As President Benson points out in his talk, there are things we can do to save America and preserve it as a great nation.  Here are some of his suggestions:

The bullet points above are my summary of President Benson’s main points.  Here are just some of the many highlights from the talk, in his own words:

Breakdown of Law and Order

Appreciation for the American System

The Way to Safety