When I was about 13 years old (1989), I was on the eighth grade basketball team. I loved playing basketball and I loved the comradery with my teammates. The coach determined that we should all get the same basketball shoes, and he chose ones costing $65, which was way out of my parent’s price range. I begged and pleaded but my parents would not consent to buying them. I felt like such an outcast, not having the high-end shoes everyone else had. Instead, I had a $20 pair that looked relatively similar to the team’s. 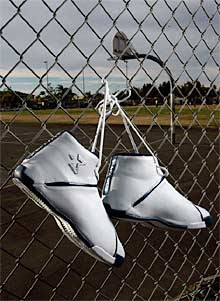 When he was growing up, New York Knick’s NBA star Stephon Marbury couldn’t afford the top brand basketball shoes either, so he has decided to do something about it (news source). In September 2006, he launched a line of Starbury basketball shoes to sell for $14.98 a pair. The Starbury would be of comparable quality to the high priced shoes endorsed by other celebrity athletes. A pair of LeBron James basketball shoes, for example, will cost as much as $150; ten times as much as the Starbury.

Marbury claims that if you take his shoes and the $150 shoes, and cut them both down the middle, you will see they are exactly the same. ABC’s John Stossel put Marbury’s statement to the test. A pair of Starburys and a pair of Air Jordans (costing over $100) were brought to Professor Howard Davis of the Parsons School for Design, and he concluded that they are indeed “constructed the same way”. (another source) He added, though, that the quality of materials used in the Starbury was inferior to the Air Jordans.

Even if the quality is lower than the more expensive brands, for $15, I thought it is worth a try. But the Starburys can only be bought at Steve and Barry’s sporting goods store, and there are none here in Memphis. We were recently traveling through Hannibal, MO, though, on our way to Nauvoo, IL to visit Heather’s parents. Hannibal has a Steve and Barry’s store, so we stopped by and got a pair of Starburys.

To give even more credibility to his line of shoes, Stephon Marbury wore his Starburys for the entire 2006-2007 basketball season. He had one of his best seasons ever. His teammate Steve Francis has also started wearing them and now Ben Wallace of the Chicago Bulls is wearing and endorsing the shoes. Tonight, I’ll be giving the Starburys a try, so we’ll see how they stand up to Church basketball.

Seat Belts Do Not Save Lives? Legalization or Amnesty, the Result is the Same
Scroll to top