Well, tomorrow at midnight is the deadline to submit your federal income tax, so I thought this would be a great occasion to talk about the subject. For those procrastinators out there, you better get busy. As for me, I filed my taxes just as soon as I could; I’m not too fond of giving the government an interest free loan because of their over-taxation, so I want to get my refund just as soon as possible. 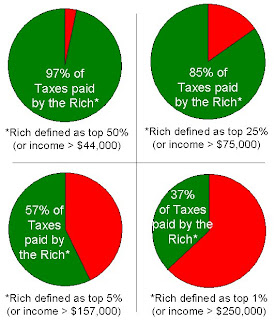 Also, given the upcoming presidential elections in 2008, I think this is a particularly good time to have a lesson on taxes. You see, Republicans tend to run on a platform of cutting taxes and Democrats tend to accuse Republicans of only favoring tax cuts for the “rich”. That begs the question, how do you define rich?

Now, maybe you don’t like that definition of “rich.” Maybe to you, “rich” is the top 25% wealthiest Americans. In that case, still you have the “rich” paying 85% of all income tax, and therefore once again, just about any tax cut proposed would be a tax cut for the “rich.”

When I graduated from college in 2001 and began working full-time, I indeed was making a little more than the average mentioned above. President Bush had just been elected and he had run on a platform of tax cuts. His opponent, Al Gore, had made that accusation that Bush’s tax cuts would only help the rich (see http://usgovinfo.about.com/library/weekly/aa100600a.htm). Yet later that year, I (a hard working, middle class, bottom of the corporate totem pole, worker) got a tax refund check.

So the next time a political candidate proposes tax cuts or accuses the tax cuts of only being for the “rich,” remember that one man’s “rich” is another man’s “hard working middle class.”