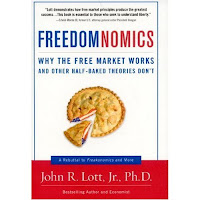 So not long after my blog post regarding the book Freakonomics, a friend of mine lent me his copy of Freedomnomics, a self-proclaimed rebuttal of Freakonomics. I don’t believe this combative attitude was necessary; I read and agreed with most the items in both books. I’m guessing the author of Freedomnomics positioned it in this way to get wider recognition, but honestly it stands on its own as a great book. Here are some of my favorite quotes:

Inconvenient for Al Gore, There Is No Truth to a Consensus on Man-Made Global... NPR Relishes in the Proliferation of Movie Nudity
Scroll to top