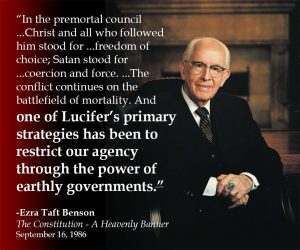 The Constitution – A Heavenly Banner is a talk that President Ezra Taft Benson gave at BYU on September 16, 1986. Though the audience was the university staff and students, Jeffrey R. Holland said the message was directed to all members of the Church. I recently re-read the talk and was impressed with what he said. The concerns he addressed had clearly been on his mind for some time. And if his imploring to return to Constitutional principles was that urgent and important in 1986, oh how important it is for us today!

Here are some of my favorite quotes from the talk:

“The central issue in the premortal council was: Shall the children of God have untrammeled agency to choose the course they should follow, whether good or evil, or shall they be coerced and forced to be obedient? Christ and all who followed him stood for the former proposition—freedom of choice; Satan stood for the latter—coercion and force. The war that began in heaven over this issue is not yet over. The conflict continues on the battlefield of mortality. And one of Lucifer’s primary strategies has been to restrict our agency through the power of earthly governments.”

“Basic to our understanding of the Constitution is that governments should have only limited powers. 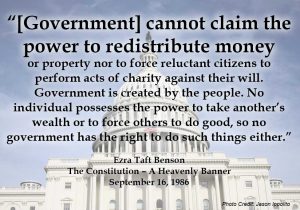 The important thing to keep in mind is that the people who have created their government can give to that government only such powers as they, themselves, have in the first place.”

“By deriving its just powers from the governed, government becomes primarily a mechanism for defense against bodily harm, theft, and involuntary servitude. It cannot claim the power to redistribute money or property nor to force reluctant citizens to perform acts of charity against their will. Government is created by the people. No individual possesses the power to take another’s wealth or to force others to do good, so no government has the right to do such things either. The creature cannot exceed the creator.”

“The most important single function of government is to secure the rights and freedoms of individual citizens.” 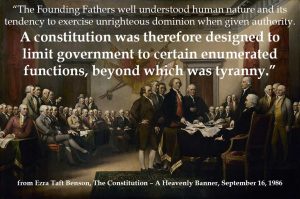 “The powers the people granted to the three branches of government were specifically limited. The Founding Fathers well understood human nature and its tendency to exercise unrighteous dominion when given authority. A constitution was therefore designed to limit government to certain enumerated functions, beyond which was tyranny.”

“At this bicentennial celebration we must, with sadness, say that we have not been wise in keeping the trust of our Founding Fathers. For the past two centuries, those who do not prize freedom have chipped away at every major clause of our Constitution until today we face a crisis of great dimensions.” 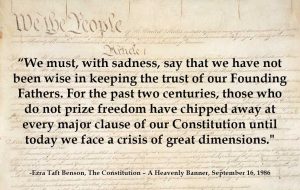 “We must be righteous and moral. We must live the gospel principles—all of them. We have no right to expect a higher degree of morality from those who represent us than what we ourselves are. To live a higher law means we will not seek to receive what we have not earned by our own labor. It means we will remember that government owes us nothing. It means we will keep the laws of the land. It means we will look to God as our Lawgiver and the source of our liberty.”

The Lincoln Hypothesis How to Vote: Gospel Principles for Choosing Political Candidates
Scroll to top