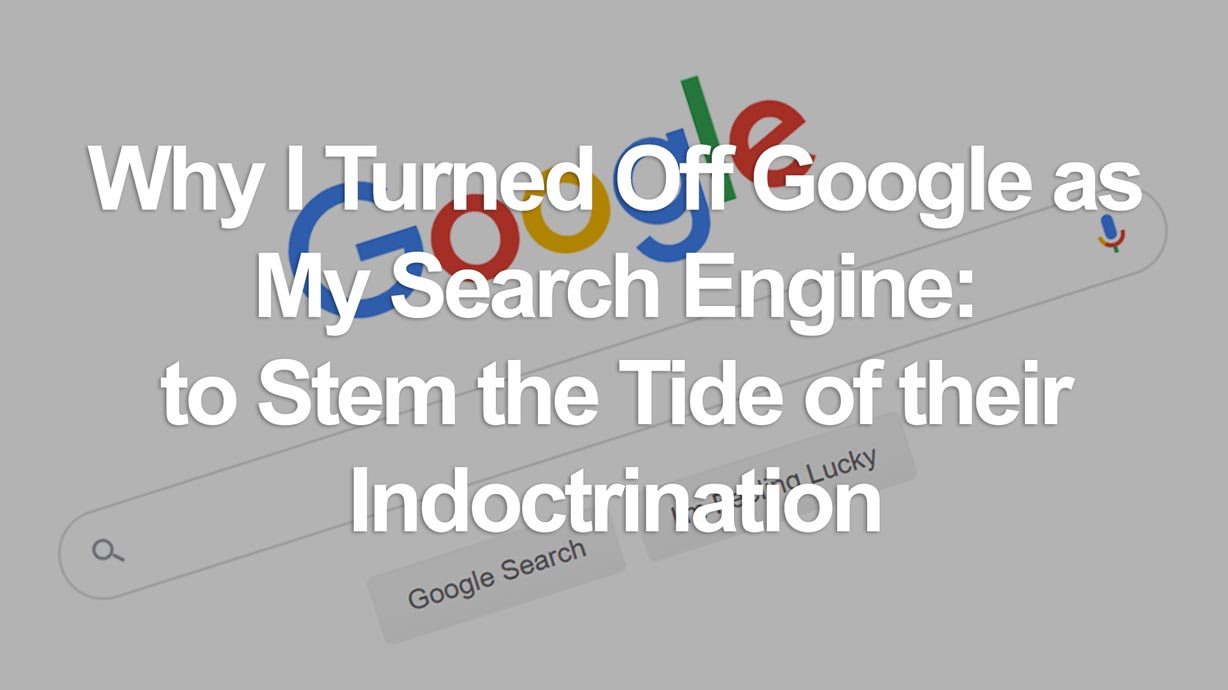 Earlier this year I finally turned off Google as my primary search engine. I have been considering it for a long time because of concerns around privacy and manipulated search results. The bottom line is that Google has a socialist, progressive world view with which I strongly disagree and the evidence is clear that they are using their position of power to push that agenda on others. I’ve decided not to take the abuse anymore, and if I can get the word out and help encourage others to free themselves from Google’s manipulations, then the world will be a better place for it.

Being a Search Engine Marketer Made the Decision Difficult

You see, I have worked as a search engine marketer for twelve years and I know that Google has traditionally delivered the best results to help you find the information you need fast. Most of my days at work are consumed with understanding how my website ranks on Google and how to get more traffic from Google search engine users. This made the decision to turn off Google as my primary search engine even more difficult, and honestly, in my work, I still have to use Google search from time to time.

More and more topics are being politicized in our country, therefore more and more of Google’s results are showing that company’s political leanings. For example, Robert Epstein’s research found, in the 2016 US presidential election campaign, that Google filtered out negative results for searches related to Hillary Clinton to surface primarily positive ones–more on that below. But regarding the fear of not getting high-quality search results, I can personally attest to the fact that my fear was unfounded. I have been able to find information just as quick and easily from other search engines, and even better, I am free from Google’s attempts to influence me with their filtered, politically biased results.

The socialist, progressive political leanings of the management and culture at Google are well-known, but let me give you just two examples.

In 2018, Breitbart released a video of Google leadership team discussing the 2016 Trump election results and demonstrating the company’s bias against conservatives and Republicans. “A video recorded by Google shortly after the 2016 presidential election reveals an atmosphere of panic and dismay amongst the tech giant’s leadership, coupled with a determination to thwart both the Trump agenda and the broader populist movement.” The New York Times also covered this story saying the video showed “Google executives bemoaning the election of President Trump at a company meeting in 2016.” Sergey Brin, the co-founder of Google, said in the video that he was “deeply offended” by the election of Mr. Trump.

Last year, Dr. Robert Epstein, a Democrat who supported Hillary Clinton, told the Senate Judiciary Committee that in the 2016 presidential election, Google gave Hillary Clinton “between 2.6 and 10.4 million votes depending on how aggressive they were in using the techniques that I’ve been studying, such as the search engine manipulation effect.” Dr. Epstein went on later to say in an op ed that “when it comes to election manipulation, left-leaning American technology companies make the Russians look like rank amateurs.” Dr. Epstein, a Harvard PhD and well respected psychologist, professor, author, and journalist, has shown through his research how big tech, particularly Google, is aggressively pursuing tactics to keep Republicans out of office. And he has sounded the alarm, not because he wants Republicans to win, but because he wants freedom and democracy to win. 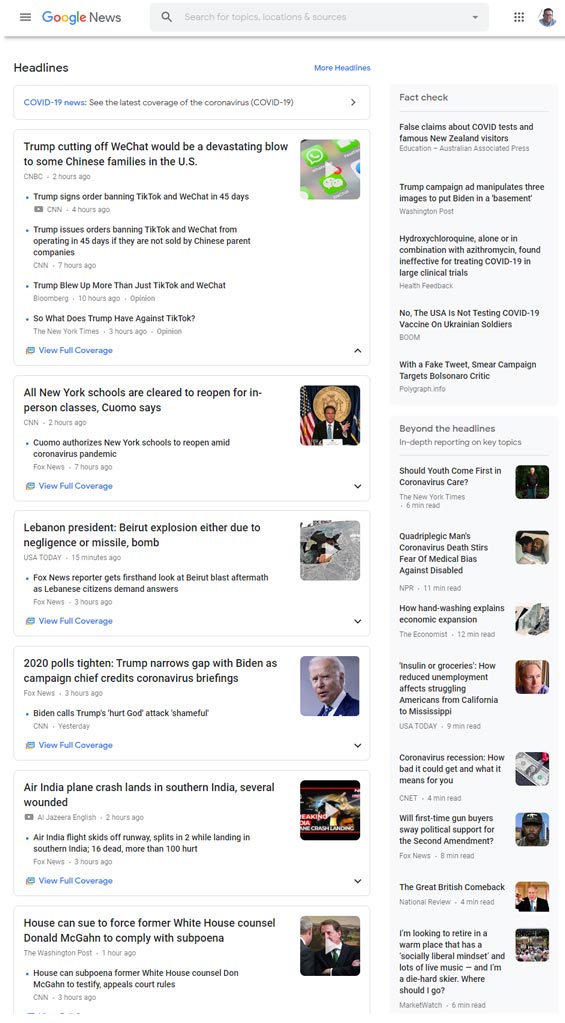 One of Google’s strengths as a search engine is that they know individual users and serve up personalized results that are more likely to deliver the information the person is looking for. Google knows the political leanings of their users because they track search history, the websites you visit, and they have countless other ways to track your personal data.

Regarding me personally, Google knows I prefer conservative, Republican, libertarian, and Constitutionally-minded sources. Why then, does Google push CNN and other left-wing news results on me so relentlessly? I occasionally have clicked CNN articles over the years, but CNN is a socialist, progressive leaning news source that I rarely read.

Despite knowing that about me, if I visit the Google News website, logged in as myself with Google’s personalized results for me, 5 of the top 15 (33%) news results are from CNN (see the screen shot and count them for yourself). Only 3 of the top 15 (20%) are from FoxNews, a source I’m much more likely to read. Of course, if it wasn’t for the fact that Google knew me, perhaps I wouldn’t see FoxNews at all and even more of the results would be from CNN.

In Google Discover, it’s the same story of pushing left-wing news even though they know I don’t prefer it. Google Discover is the news, pop culture, and other internet content feed that comes up on your mobile phone browser’s home screen if Google is your default home page. Google Discover says “we’ve made it our goal to help you uncover fresh and interesting content about things that matter to you.”

They are clearly failing at that goal with me, because my Google Discover feed has a constant influx of Trump-hating news from CNN and other socialist and communist-friendly internet articles that are of no interest to me. I’m no big Trump fan, but I’m not a Trump hater, and Google knows that, yet they bombard me with it anyway.

The final straw in getting me to turn off Google as my search engine was earlier this year when Google buried an unflattering story about a prominent socialist. I was listening to talk radio one day and heard the host mention that Marc Lamont Hill, a long-time political contributor at CNN, had told his followers to stop being not to be nice to the police because it is disrupting his Marxist revolution. He said, so I heard, that all police are part of a racist system in America so the race protesters should stop taking their pictures with police. Being nice to police, in his view, reinforces the view that the George Floyd death was the fault of a single bad police officer, rather than Marc Lamont Hill’s preferred narrative that all police are bad. This was an appalling statement, to me, so I wanted to find out if it was true and learn more. 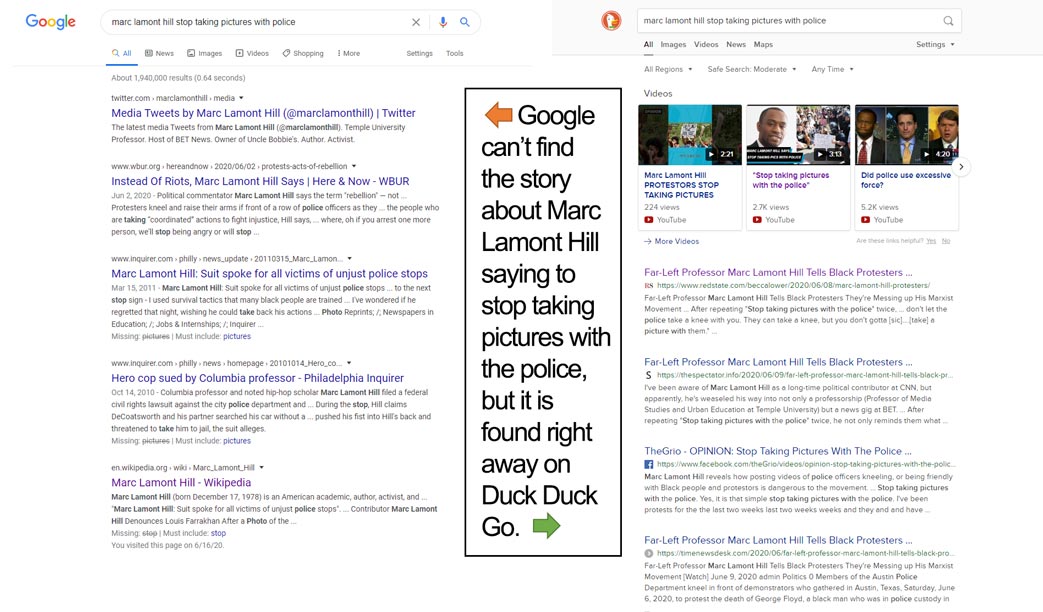 When I searched on Google, I could not find the story. I tried numerous search keyword variations, and scrolled through dozens of search results pages on Google, but I could find nothing about what Marc Lamont Hill said about not taking pictures with police. If Google was my only source of information on the subject, I would think he never said it. The source on the radio was a trusted one, so I decided to do the same search on Duck Duck Go, a search engine that differentiates itself on searchers’ privacy and unfiltered results. On the very first Duck Duck Go search, the results page was full of articles about what he said about not taking pictures with the police, like this RedState article that quotes Marc Lamont Hill as saying:

“Don’t believe your lying eyes. If you and your community have been brought up with a respect for law enforcement, if you have come to see police as friends or even friends of the family, that doesn’t serve our Marxist, revolutionary purpose. So, cut it out or stay home!”

Conclusion and How to Turn Off Google as Your Search Engine

This is not a comprehensive list of all the reasons why I am abandoning Google as my search engine of choice. But in summary, Google has long abandoned the unofficial motto they had early in their history to “not be evil.” They clearly want to use their position of power to push information they want to be seen and hide information they don’t want seen. I hope to stem that tide of this indoctrination by not using the Google Search engine, and I would encourage all others to do the same.

Now the question is how to get the other Google products out of my life, which they are also using to collect information in an attempt to have power over me–products like Google Maps, Gmail (I don’t use it but family members do), Google Classroom (again, not for me, but it has infiltrated my kids schools), Google Chrome, Google Home, YouTube (owned by Google), etc. This purging of Google could take a while.

If you want to join me in turning off Google as your search engine, there are many ways to do it. You can start your internet journeys at Bing.com, Yahoo.com, DuckDuckGo.com, or other search engines. If you use the Chrome browser, you should also go to “Settings” located under the three vertical dots in the top right corner of your Chrome browser. There you can click “On startup” to set what page, often a search engine, comes up when the browser is launched. You should also set the “Search Engine” on the left menu to be Bing or Yahoo or something else. To use Duck Duck Go as the default search engine, you will need to add their Chrome extension which you can find by clicking here.

My Experience Attending a Conversation on Racial Inequality